Creality, a leading global 3d printer manufacturer, announces that the company’s first brand ambassador has set out on his week-long humanitarian journey in Musoma, Tanzania. He is working with the local healthcare staff to 3d print prosthetic and orthotic devices for children and adults in the local community, delivering Creality’s spirit of bringing the convenience of 3d printing technology to thousands of households.

Kyle, a biomedical engineer from New York, the US, got acquainted with Creality printers during his time working as a volunteer of e-NABLE, an international non-profit community. “My first experience with Creality 3D printers was in the summer of 2019 when I began working with the founder of e-NABLE, Jon Schull, at the Re-NABLE Lab in Rochester, New York,” said Kyle. “The lab had two CR-10s and two Ender-3 3D printers, and they were workhorses.”

He soon became a dedicated Creality user and started to use Creality 3d printers in his volunteer work of 3d printing prosthetic and orthotic devices for the underserved. In early 2021, Kyle participated in the “Creality Global DIY Creative Modification Masters Contest”, a competition engaging Creality users in the joy of 3d printer DIYs. He was presented the Special Contribution of the Year Award for his work in developing a portable 3D printer for humanitarian use in remote locations, and his contribution in Tanzania where he traveled in 2019 to 3d print prosthetic devices for children and adults in the local community.

In August 2021, Creality officially announced Kyle as the company’s first brand ambassador for his philanthropic spirit and enthusiasm in 3d printing, which deeply echo Creality’s values of bringing the convenience of 3d printing into thousands of households and making 3d printing technology inclusive for the people in need.

“Our decision to invite Kyle as our first brand ambassador is largely supported by our users, and they are 3d printing lovers who share the spirits of innovation and compassion,” said Ao Danjun, CEO of Creality. “Create reality and achieve dreams’ is deeply rooted in Creality’s philosophy. We hope to deliver this message to users and beyond through Kyle and bring warmth to those in need using the power of 3d printing technology.”

Following his trip to East Africa in 2019, Kyle is back to Musoma, Tanzania, a city on the east shore of Lake Victoria on 1 August, after traveling more than 11,000 km from New York. He is working with the Lake Victoria Disability Centre (LVDC) and a prosthetic and orthotic clinic called TABASAMU (which means ‘smile’ in Swahili) with the help of six 3d printers donated by Creality. These consists of three Ender-3s, one Ender-5 Plus, and two Ender-3 S1 Pros, which are used to create a variety of low-cost prosthetic and orthotic devices. 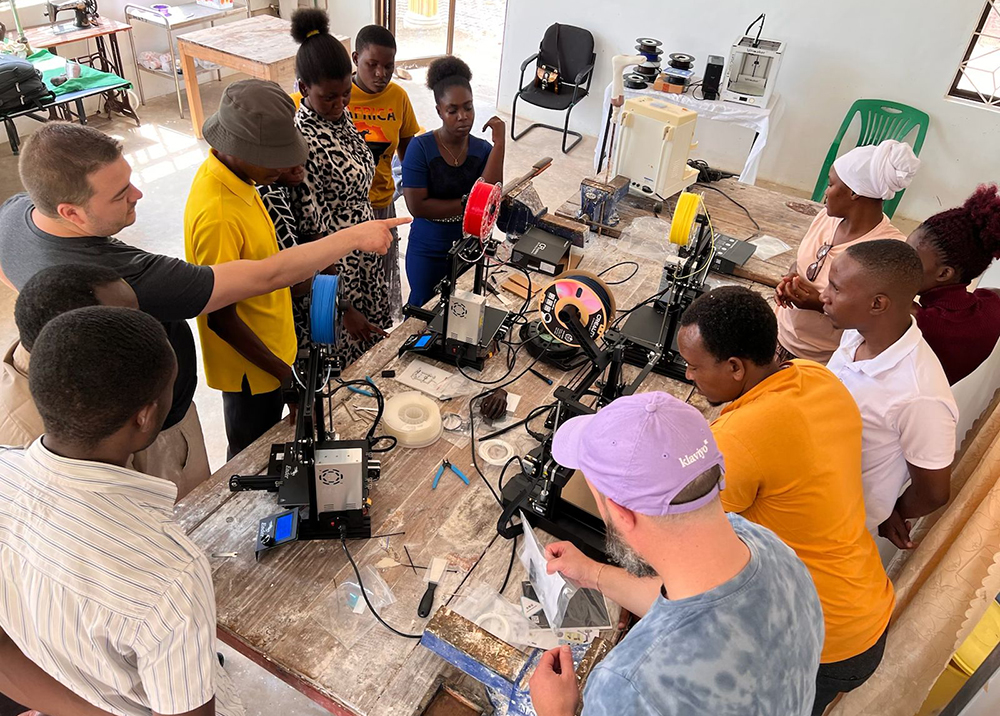 Tanzania is a developing country in East Africa with more than half of the population living in rural areas[ Institute of Development Studies, Disability Inclusive Development, Tanzania Situational Analysis, June 2020 update]. According to a recent report published by UNICEF[ UNICEF, Situation Analysis of Children and Young People with Disabilities in Mainland Tanzania and Zanzibar, 2021], the overall disability prevalence rates for people aged five years and above are 6.8% in Mainland Tanzania and 3.2% in Zanzibar, which means over 3.3 million people in Tanzania are living with a disability. 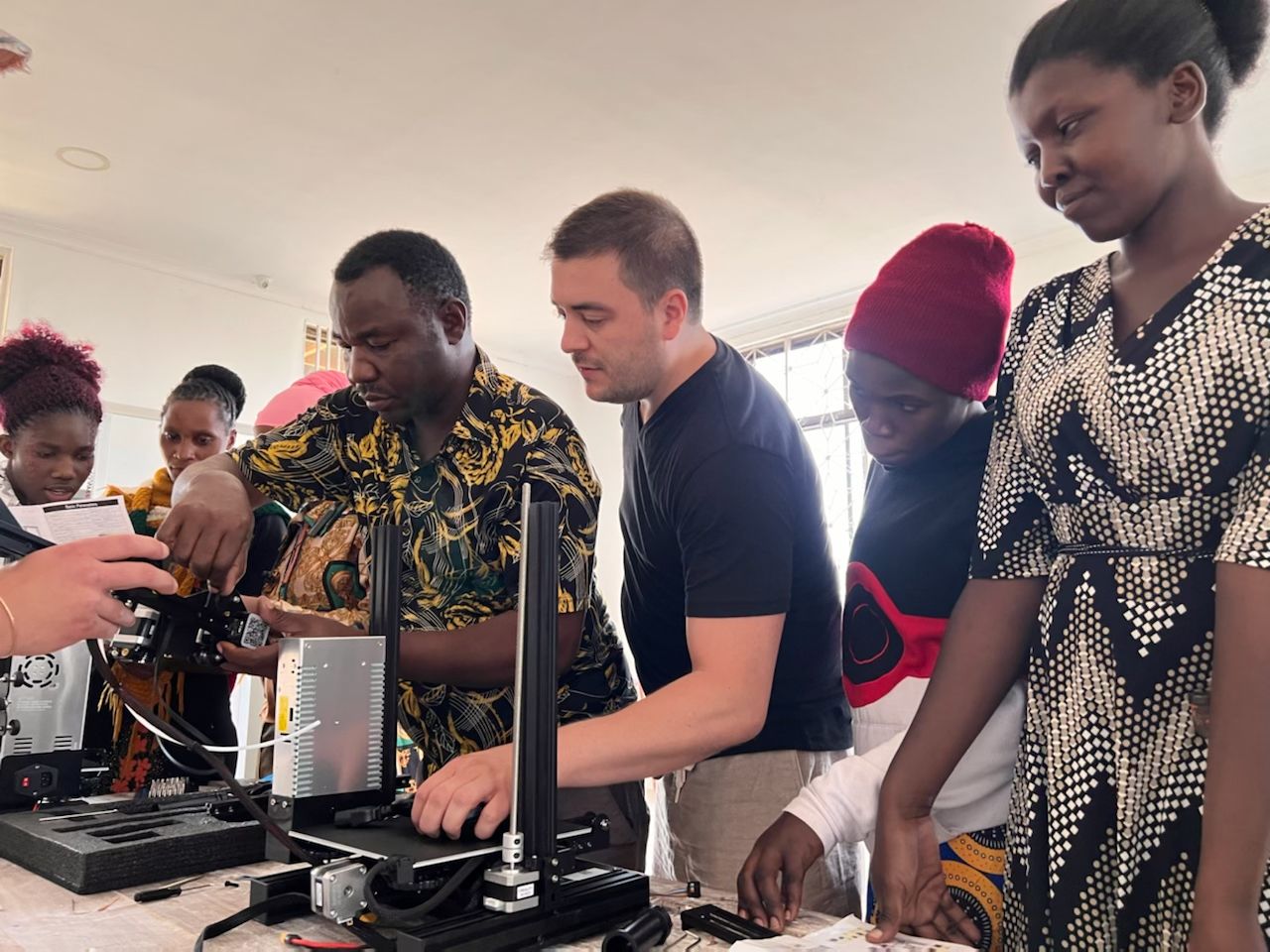 Particularly, Kyle observed that club foot is very prevalent in young babies in Musoma. “These babies are born with one or both of their feet rotated inwards,” said Kyle. “We plan to use the 3d printers to both model and then create low-cost boot and bar orthotics for these children to help slowly rotate their feet back outwards and correct this problem. 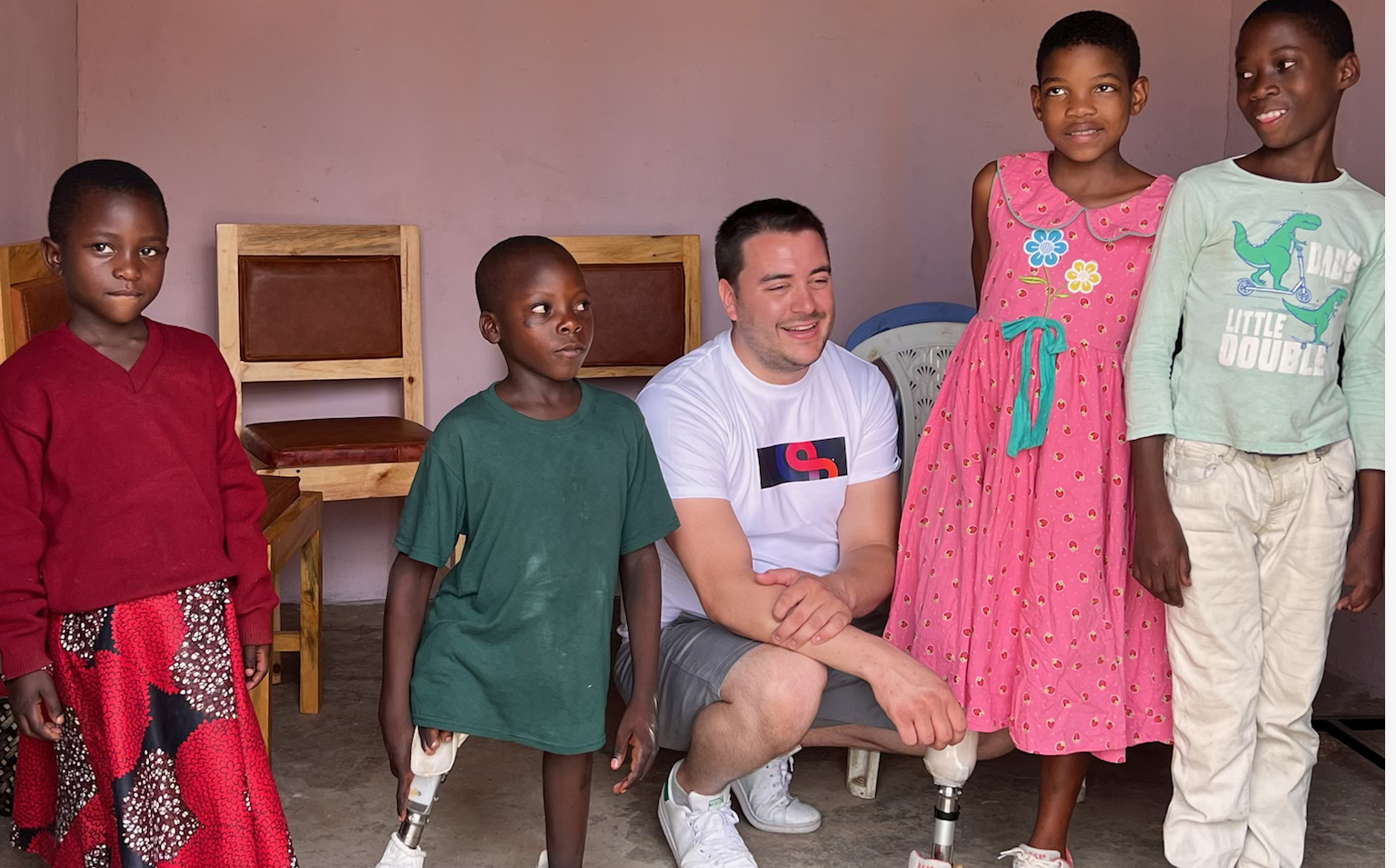 “We also plan to use the 3d printers to create a low-cost upper arm prosthetic device for a young girl who was born with a congenital defect.”

To provide 3d printed low-cost assistive devices in this part of the world, Kyle said one big challenge is the stability of the electrical grid. “During my trip in 2019, there were many blackouts, sometimes for several seconds and sometimes for several hours,” said Kyle. “Without a UPS (uninterruptable power supply), it is always a gamble whether the 3D print will finish before the next time the power goes out.” 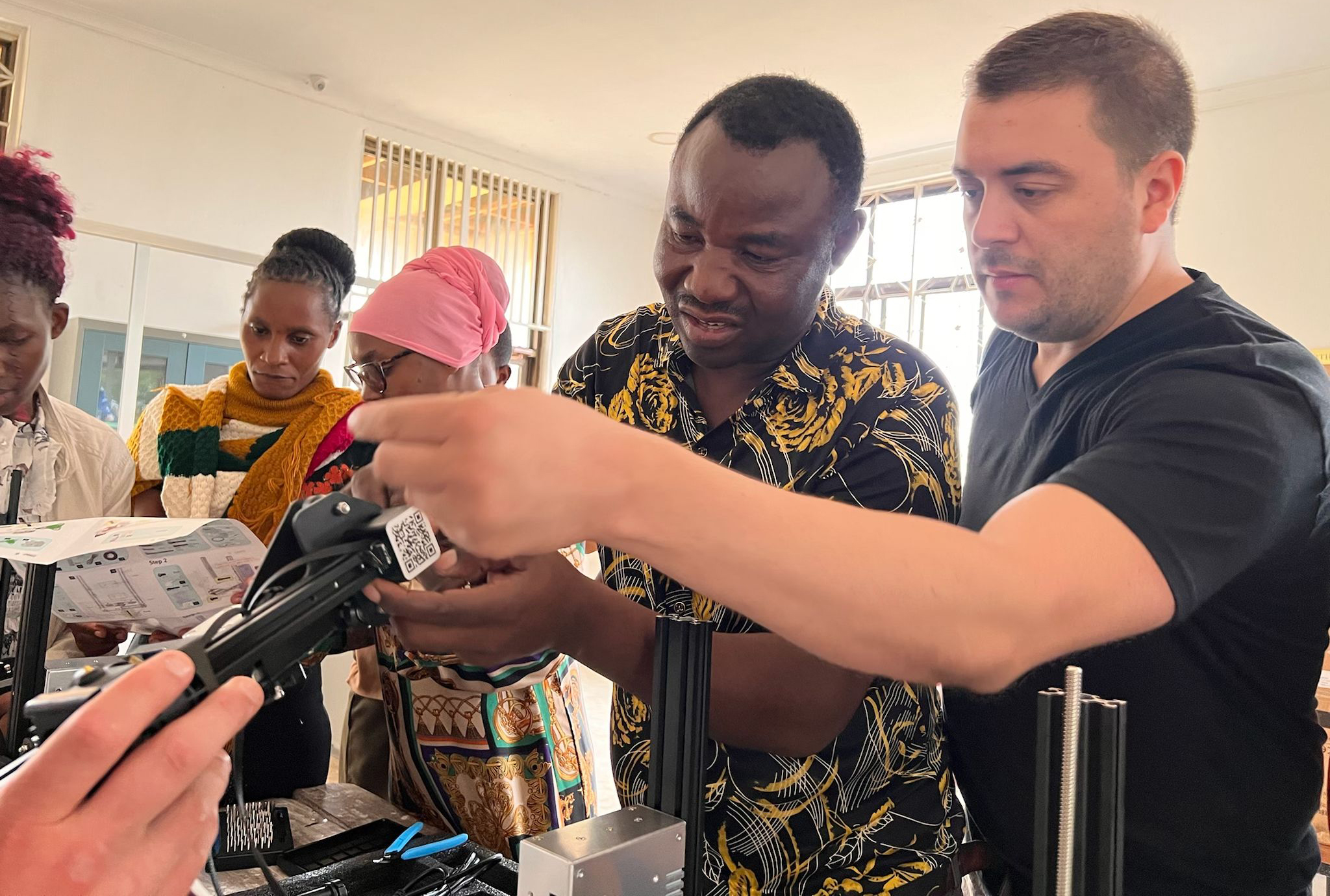 He added that it is also difficult to source 3d printer filament, as the industry is not well-established locally.

During his trip, Kyle will also hold a food party event for 150 community members. “Food insecurity is unfortunately tough in certain developing countries,” said Kyle. “[Holding a food party] is just my way of giving back and saying thank you for having me.”

His trip is expected to end on 5 August but he said he would stay in contact with LVDC and TABASAMU. “I hope this is not my last trip to Musoma. I'll certainly stay in strong contact with my colleagues. They're doing wonderful work. And I hope to continue to contribute where I can.”

For more stories about Kyle: https://www.creality.com/articles/lending-a-hand-a-creality-users-mission-to-provide-prosthetic-devices-to-children-in-tanzania 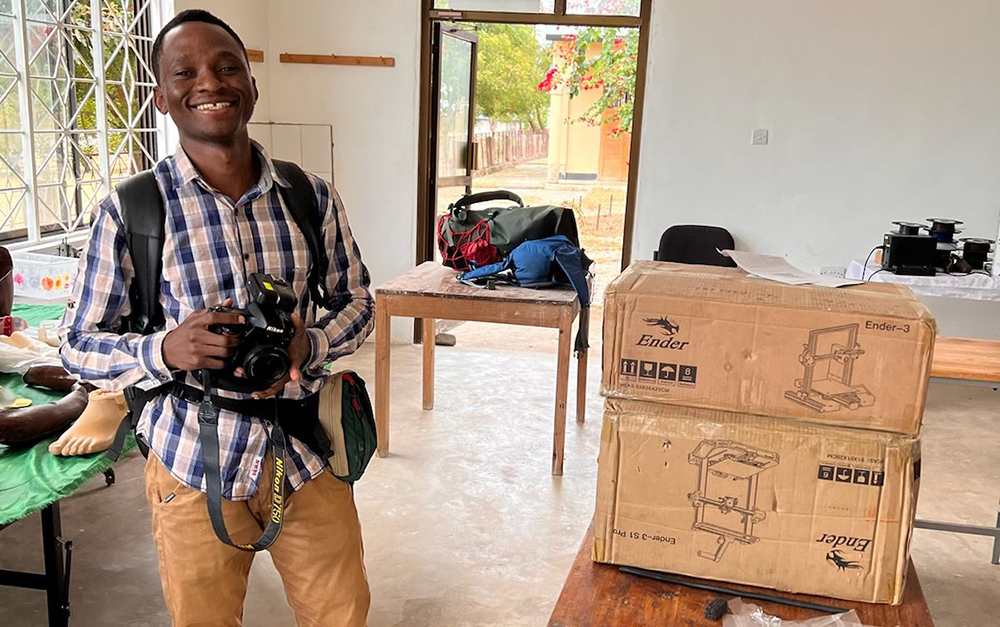 Creality is a global pioneer in the 3D printing industry that focuses on the design, research and production of affordable smart 3D printers and 3D printing-related products. Creality is the creator of several market-hit products and has expanded its footprints across more than 192 countries and regions worldwide, introducing 3D printing concepts to homes, schools, factories and other institutions, and driving digitalization in manufacturing, education, healthcare, architecture and beyond.