On December 1st 2021 during EXPO 2020 in Dubai in United Arab Emirates, Creality – one of the largest manufacturers of amateur 3D printers in the world, presented a number of new products that it intends to introduce to the market at the beginning of next year. In a short series of articles, we present individual novelties one by one – we started with the latest version of the popular Ender-3 S1, in this article we describe a new model from a higher series of 3D printers from the Chinese manufacturer – the new CR-10 Smart Pro.

Originally, the CR series was an improved and enlarged version of the Ender series, with work areas starting from 30cm in the XY axes and ending up to 50cm on the CR-10-S5. The latest version of this 3D printer, however, sets the bar much higher, offering a lot of interesting functionalities that we will not see in the highly budget Ender series …

But let’s start with the issues that coincide with both models. Like the new Ender-3 S1, the CR-10 Smart Pro is equipped with a Sprite direct extruder. The difference, however, is that in this model it is stronger, more efficient and much more resistant to high temperatures. The print head is adapted to 3D printing of composite materials based on carbon fiber, the manufacturer also assures that it can handle polyamides (PA).

The 3D printer also has an auto-leveled work table, operating in the same way as in the Ender-3 S1. There is a magnetic pad mounted on it, which can be removed in order to easily peel off finished 3D prints. The table surface is classic for the CR-10 model, 30 x 30 cm in the XY axis and 40 cm in the Z axis.

We now turn to the unique novelties of this particular model. The most important change is the built-in Wi-Fi module and remote control of the 3D printer from the level of the cloud application. It is true that the files are still physically saved on SD cards, but they can finally be transferred to the device remotely. An aesthetic touch panel with a new, attractive UI is used for direct operation of the device. 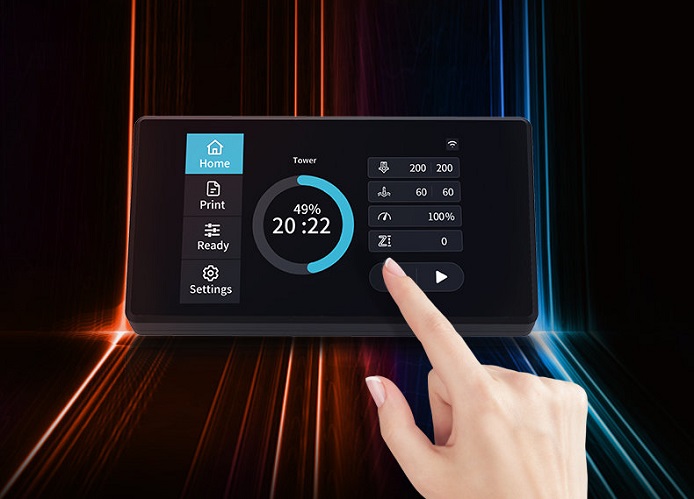 Creality has introduced some useful, but quite primitive solution that is obvious in its simplicity … independent – external video camera, which is placed … somewhere next to the 3D printer. Not fancy, but possibly quite functional? In order for the image from the camera to be visible also at night, the CR-10 Smart Pro has LED lighting, which the Ender-3 S1 has to be purchased independently.

When it comes to additional accessories, two deserve attention – a textile tent that we put on a 3D printer to create something like a closed working chamber and a filament holder with a display and a weight sensor that weighs the material left on the spool. The latter – if it actually works properly, it can turn out to be a great solution that I would love to see in all 3D printers.