Ball linear rails with high precision ensure Z-axis to move stably and eliminate waviness. The height of the 3d printing model is 160MM. The model has a smooth surface and fine details.

LD-002R 3d printer uses an LCD screen to mask an image of a layer over a UV light source with a 405nm wavelength. LCD light bulbs in parallel matrix provide uniform light with light evenness up to 90%. A reflective cup improves light concentration and even illumination. A stable light source decides a higher print success rate. 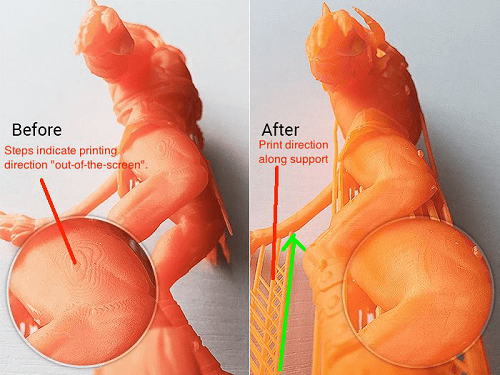 There is a 2K micron-level accuracy on the Creality LD-002R 3d printer. 2K solid-state display system achieves a precision of 0.02-0.05mm, producing a smooth surface and delicate finish. The single spot is 26.1μ㎡, and its precision can rival the industrial-grade machines, meeting the demand for fine printing.

Have a look at the picture with the power function. Only the very expensive DLP 3D printer has such a fine surface.
(Notice: only effectively reduce the zigzag phenomenon, not at all.)

LD-002R 3d printer has an all-metal integrated shell with an elegant and high-end appearance. you can observe the printing process at 360 degrees.

The new UI interface of the LD-002R 3d printer supports Chinese and English, monitors real-time printing. With a 3.5inch touch screen, it has a high resolution and a clear display.

LD-002R 3d printer uses ChiTu Box firmware and pairs with the ChiTuBox slicer, which features 4x and 8x anti-aliasing as standard. So, it has unbelievable precision. The slicer with an Intelligent support algorithm can make you preview the model, support the modification of a model, and allow various files. It can save you much time and energy, what convenient.

Keep researching, keep innovating, Creality is always one of the best 3d printer manufacturers in China.