Epilogue for the Well-liked 3D Scanner

In early February, Creality launched the crowdfunding campaign for 3D scanner - CR-Scan Lizard on Kickstarter. The campaign made a stir among users with 1000 units in 17 minutes, and 1 million dollars in 4 hours. Up till now, Creality has received more than 2550 comments from users and over one thousand media articles given reports to this campaign.

The crowdfunding campaign will end on March 12th, 2022.
https://www.kickstarter.com/projects/3dprintmill/creality-cr-scan-lizard-capturing-fine-details-of-view 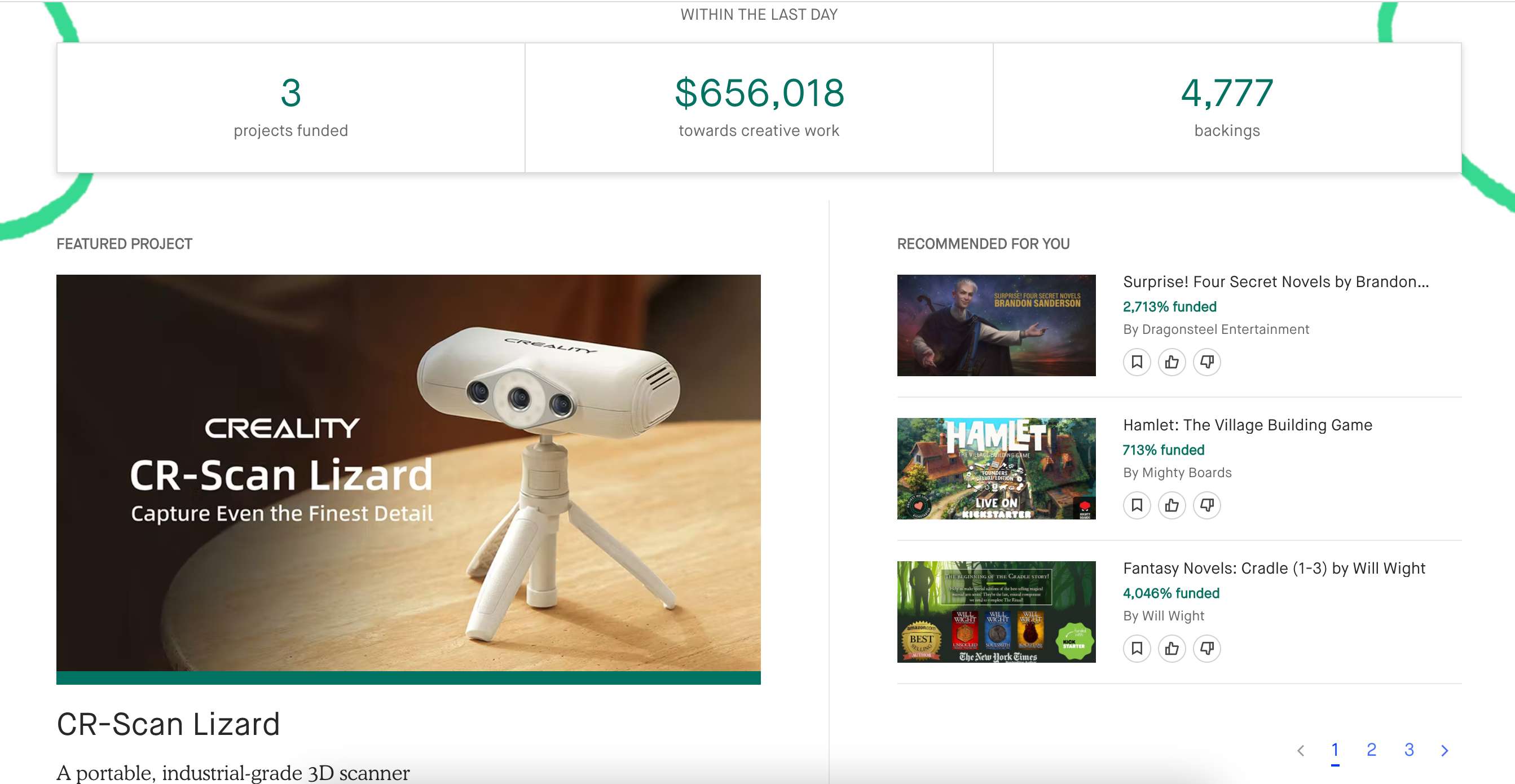 CR-Scan Lizard is placed on the first page on Kickstarter.

Media like ALL3DP and Tom's Hardware gave detailed reports to the campaign:

Inspired by the 3D scanner, two users Don Barton and Sébastien collaborated and successfully produced a play named Global Treasure Hunt via 3D modeling, which will be unveiled soon.

CR-Scan Lizard with an affordable price (minimum $300) is featured by its 0.05mm unmatched precision. Compared with the industrial-grade scanners (around $10,000), CR-Scan Lizards satisfies consumers with both its quality and affordability, vastly reducing the burden for innovators.

Combined utilization of 3D scanner and 3D printers will provide a better experience.

·  Ender-3 S1/ S1 Pro Direct Extrusion System, Print with Multi-filaments: If the tyre of a car model is lost or damaged, connect CR-Scan Lizard with Ender-3 S1 / S1 Pro, the lost or damaged parts can be reprinted or restored with TPU under up to 300°C high-temp condition.

·  HALOT ONE and HALOT LITE High-precision Printing: For anime enthusiasts, they are encouraged to use CR-Scan Lizard and Creality HALOT ONE (6.08 inches) or HALOT LITE (8.9 inches) together because of the perfect printing for complex structures such as micro-hole and micro-column of 0.01mm, creating the anime in a vivid way.

·  CR-10 Smart Pro Remote Printing: If you are imaginative and want to bring ideas to reality, CR-Scan Lizard can help complete the modeling, after which, connect the scanner with CR-10 Smart Pro, users can print anytime and anywhere with a click on phone.

·  Ender-2 Pro Movable Printing: If you travel among different places and plan to bring 3D products, the compact CR-Scan Lizard and Ender-2 Pro which are easy for carrying will be the best choice.

·  CR-30 Unlimited Z-axis Printing: Tools are always needed in a film shooting, such as a long sword. With CR-Scan Lizard and CR-30, scan and then print, the sword will be right there!

Stand by You, Heading for Healthy Development

Creality will celebrate its 8th anniversary on April 9th. Users have always been the most valuable asset. Creality not only cares the needs of the creator group, but also continue to gain insight into the needs of non-creator groups with products continuously upgraded. Through communication with users, they found that non-creator groups have different pain points in model creation, slicing, printing (including special environments), and post-processing.In order to solve these problems, Creality will announce strategies on the 8th anniversary for better information accessing and pain points solving (product innovation, Creative Cloud 4.0, Creative Ecology, etc.) voices listening and choose & buy, etc. Stay tuned!