The positioning of Ender-7 3D printer:

A new product always is released during the annual anniversary celebrations of Creality. So, the Creality Ender-7 3d printer is our latest high-end Ender series product. Continuation of the Ender-6 high-speed printing function in Ender-7, Continue to work on more speed breakthrough.

Design Inspiration:
The product shape is derived from the structural form of the ancient building " Athenaeum ", and the most intuitive visual feeling is the magnificent ramification.

In order to make sure the powerful performance of the product, the three Roman column type profiles were adopted to build the product, increasing the stability of the same time, but also reflects the " three beget everything " philosophy. It is a symbol of the omnipotence of this printer.

What is make the Ender-7 raise our collective eyebrow?

As we all know, the most important for people to buy the Ender-6 is fast printing speed, just Imagine if there were a printer that could print faster than Ender-6.

Aiming to establish a "new speed benchmark" in the FDM field, the Ender-7 is the latest addition to the company's long-running Ender series, capable of printing at speeds of up to 250 millimeters per second.

How to ensure precision under fast printing speed? 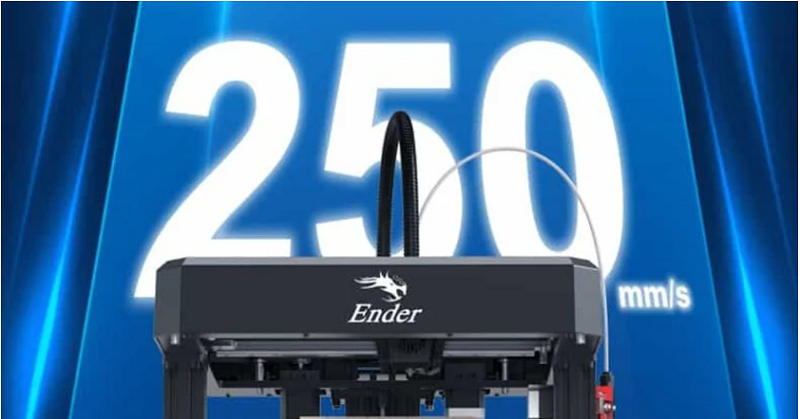 2：High-speed cooling fans
Thanks to its unique butterfly-shaped wing ducted cooling fan, the new Ender also draws in 169% more air than previous models, providing the cooling needed to ensure print quality, while its customized nozzle can hold up to 50mm³ inside its melt for smooth feeding, even at high printing speeds.

As a result of these upgrades, the Ender-7 is finally able to ensure the quality and efficiency of the printed shape.

Where to buy the Creality Ender-7 3D printer?

Click Creality Alibaba international store to check the Ender-7 and buy it. You are free to contact us if you have any questions about our Creality 3D printer.

The Magic “Knocking Lamp Beads” Experiment
3D Printing in Aerospace Industry
Free Consultation
Don't hesitate to e-mail us with any questions or inquiries, we would be happy to answer your questions.
If you have any questions or suggestions, please leave us a message, we will reply you as soon as possible!
Send