Meet You on This Anniversary Day

HomeBlog
Meet You on This Anniversary Day 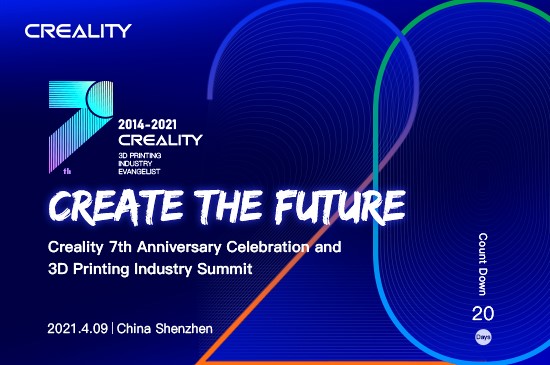 IT’S APR. 9, Creality established its FIRST office in Shenzhen as a 4-personnel start-up of 20㎡ office base——where it invented our 1st printer.

And thus it became the birthday of this singular influential printing enterprise in the resting industry.

On this day in Gems Cube International Hotel of Shenzhen, we decide to mark the memorable milestone and put it to be the industry summit, when we will aim to push to be the Single’s Day of Creality in other coming anniversaries.

This anniversary celebration will be attended by 1,000 people, including guests, staff, media friends, and other pronounced giants of this industry who focus on the advanced progress and cutting-edge technology of this industry and regularly lead the printing innovation. It’s a big gala also concerning the tech storm.

As an industry-leading company, we always set to create works full of creativity and ingenuity to impress the world users. Similarly speaking, it’s innovation and endless perseverance which push us to be here, thus propelling us to break the boundaries in every creation and try to intelligently guide the future, helping to build the technology innovation ecosystem, because, striving to be the global leading enterprise of the consumer-grade printer is where we aim. As such, we will also launch a new blockbuster product of mystery on this anniversary day.

This celebrating event will be witnessed by all global users through media communication and released by more than 100 media that representing the domestic and overseas common voice, which means it will be synchronously broadcast on major global platforms including Facebook, Youtube, Netease, Nanjixiong, Bilibili, etc.

The general manager and one of the four co-founders of Creality, Chen Chun, is scheduled to give a speech on this day and the awarding winners of Creality Global Creative Modification Masters Contest will be given the prizes also.

Light and shadow flow to image with a spotlight, strivers have their own words to tell the final truth. It’s the time for us to scan the future and create this printing glamourous era hand in hand together.

Waiting for your witness on Apr.9. Let’s count down to see its resplendent blossom.

What Are the Trends of the 3D Printer Industry in the Future?
What Is the Difference Between FDM and SLA Products?
Free Consultation
Don't hesitate to e-mail us with any questions or inquiries, we would be happy to answer your questions.
If you have any questions or suggestions, please leave us a message, we will reply you as soon as possible!
Send